N
Nicolas D
Good but Error on the pack haging

Hi, I like your nuddles, but there is an error on the weight on the packaging : it's 180g not 200g as mentioned. See the picture below. Regards 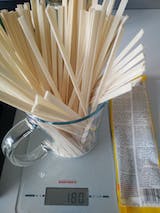 Noodles that are not full of fake rubbish are hard to come by these days, and these are nice and the texture is perfect! Good stuff!